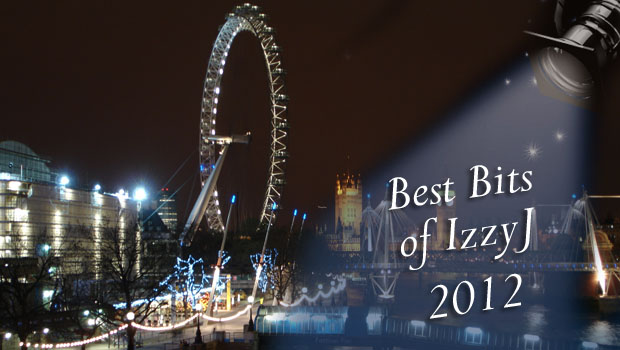 2012 has been a great year for all at izzyj and we are excited to welcome 2013 to the world as we have a feeling this could be even better! In this blog we are going to take a look back at the top 10 best bits of 2012, in preparation for the new year! Just a reminder of the events that have occurred throughout the world and Apple world alike this year.

After receiving an overwhelming number of questions and queries about how to use Apple products and get the most out of your device, izzyj was created to combat this.  Richard Groves, Director, with his 20 years experience in the technology field was able to see a vast gap in the marketplace for izzyj. The website provides an interactive community for Apple users to find the help they need with their device through videos and articles and we hope you are all enjoying it!

The Games have finally started after seven years of planning and anticipation, and what a start it was! The Opening Ceremony was beautifully choreographed, and captured the major events in British history perfectly. Danny Boyle’s interpretation of the British culture was reflected completely within the various sections as the ceremony evolved. GB finished with 65 medals, with 29 gold, 17 silver and 19 bronze and coming a grand 3rd in the medal table.

Here at izzyj HQ we couldn’t wait to show you what we have been working on, our brand new website finally launched in August! We are so happy with the results, the new website reflects the concept of izzyj perfectly with a fresh modern twist. The update introduced some new game reviews, bringing you the best games around to help you find the one to suit you. Our top app and games section features on the homepage and is a quick and easy way to find out the apps/games that izzyj recommends for you. These are just to name a few of our new website features, but it’s best to take a look for yourself!

The iPhone 5 was a great success Over two million pre-orders were received within 24 hours. Initial demand for the new phone exceeded the record set by its predecessor, the iPhone 4S, by selling over 5 million units in the first three days. The iOS 6 updates were equally as successful bringing some great new features to your iPhone/iPad.

All the golf fans across the globe would have been gripped to their seats all weekend watching the Ryder Cup. Some may have lost all faith in team Europe as heading into the final day trailing 10-6, however the team made history by clinching 8 and 1/2 points to retain the trophy. Captain Jose Maria Olazabal described the victory as the ‘Miracle of Medinah’ and dedicated the win to his late friend Severiano Ballesteros.

Here at izzyj we were eagerly awaiting an announcement for the launch of the long-awaited iPad mini. Rumours were circulating about the cheaper, smaller alternative to the 10inch iPad. izzyj is here to bring YOU the rumours we have heard on the grapevine to keep you in the loop with the latest Apple news.

8. Google Maps is back on iOS

The wait for Google maps to return to the app store is over! December brought the release of the Google Maps app for iPhone with an iPad version on its way very soon. After Apple pulled Google from iOS after patent wars, the Google Maps App is with vengeance! As we all know when it comes to maps Google are the best in the business. Here at izzyj, we have found the Apple replacement maps to be way below the standard of the mighty Google you will be rejoicing to hear that its back and better than ever!

Since August our Youtube Channel has really taken off, going from just 3,000 views to over 30,000 in just 4 months. We are delighted with this result and are glad that our video tutorials are proving useful. its a great achievement for us and one we hope to build on in 2013. if you would like to suggest a video tutorial for us to produce, please send your ideas via Twitter @izzy__j or Facebook.

To round off our year of blogging with the best apps to help you achieve your New Years resolutions. From losing weight to getting fit and saving money, this blog is to help you really stick to those resolutions and incorporate them into your lifestyle. Happy New Year from all of us at izzyj, we hope you enjoy your celebrations tonight and have a fabulous 2013!