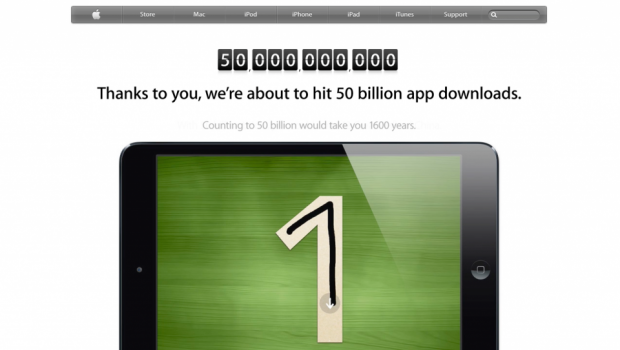 Apple’s App Store reached an amazing milestone on Wednesday by topping 50 billion app downloads. That’s according to the countdown timer on Apple’s Web site and in iTunes but Apple also confirmed the benchmark on Twitter:

The person who downloaded the 50 billionth app will get a $10,000 App Store gift card from Apple, and the 50 people who downloaded apps right after that each will receive a $500 gift card. There’s no word yet on who the winners are but Apple says the announcement is coming. Apple launched plans for the contest at the beginning of the month and added a count-up timer first in iTunes and later on the home page of its website, which showed various examples of just how big 50 billion is.

Apple’s last big contest for the App Store was for the 25 billion benchmark in March 2012. Chunli Fu, a customer from Qingdao, China, was the winner, nabbing a $10,000 gift card and a trip to one of Apple’s stores to pick it up. In February of this year, Apple paid out a 10,000-euro iTunes gift card for the 25th billion song sold on iTunes. The benchmark comes on the heels of Google announcing that its Play store has reached 48 billion app installations.