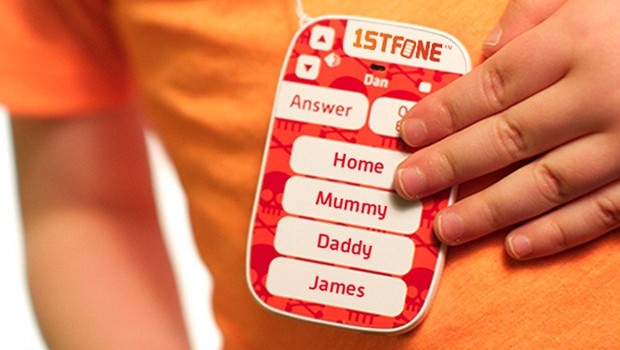 A mobile phone aimed at four-to-nine-year-olds has gone on sale, promising to help protect children from being bullied or exposed to harmful images and videos.

Called the 1stFone, it’s the size of a credit card and doesn’t have a screen. It also cannot connect to the Internet which means children will not be exposed to anything inappropriate that can be found online, it is simple a communication tool to use mainly in emergencies. It costs just £55, and is made by OwnFone, the company that also makes phones for the elderly.

1stFone’s has basic functionality, which means it’ll reduce the risk of its owner being cyberbullied, sexted, seeing what they shouldn’t online, or being mugged. For example, parents can enter 12 numbers into the memory, along with an entry for 999, and the child won’t be able to call anyone else. This phone is completely controlled by the parent which allows them to ensure that the children are being protected and using the phone for its purpose only.

“In a world dominated by smart phones, parents face a difficult choice when it comes to finding a first phone for their child,” said Tom Sunderland, founder of OwnFone. “We wanted to design a fun product that appeals to children but puts parents in complete control and minimises usage while still providing a vital connection between parent and child.”

Critics like Sue Palmer, author of Toxic Childhood, acknowledge kids do want phones, and that a more limited mobile could be a positive step. But she told the Telegraph that marketing a phone to kids so young is “just another way of trying to make money out of children and their parents.”

Siobhan Freegard from Netmums.com added: “Marketing mobiles to pre-school children is wrong. No four-year-old needs their own phone as they should never be left alone or in a situation where they need to ring an adult.”

Some parents don’t want their kids to start using phones too early, but the children have different ideas. Mobiles could obviously be vital in certain situations, but then there’s the risk of exposure to the darkest corners of the Internet. Phones and tablets will also be crucial to the way we educate ourselves and work in the future, so keeping a child away from such devices could leave them disadvantaged later in life.