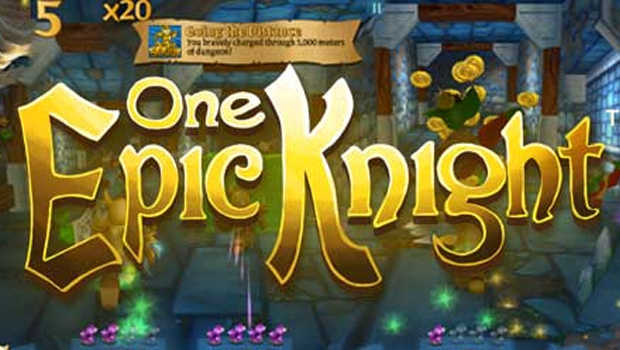 Simutronics bring us a new endless runner style game with a great comical twist, voice overs! Playing as a small golden knight, you run endlessly around the castle, dodging critters and collecting coins, another average endless runner game you may think, well not so much as whilst you run as far as possible, your comical little knight makes funny remarks as you go, you may just find yourself running in to walls just to hear the comments he makes.

The game starts with a nice little fire lit scene, which turns out to be the menu, nicely done! Press on the screen to start running or press on the script on the tree to access the game menu. Here you have the option to buy upgrades with the coins you collected in-game, to enable you to run further or you could jazz it up a bit by buying new costumes (the chicken suit is a must buy!). A game where you just run can get a little boring but this one keeps it up by adding goals or “feats” to challenge you further. Don’t forget to look out for the special treasures along the way which you can add to your vault! As you run through the castle corridors you can also collect swords and shields which give you the ability to smash through obstacles and get rid of those nasty critters!

When given an endless runner game you tend to think, “oh great, another endless runner game”, but fear not this one is definitely worth the download. With a great animation style, almost rayman-like, and an array of comical speeches, you’re bound to have endless hours of fun with One Epic Knight.