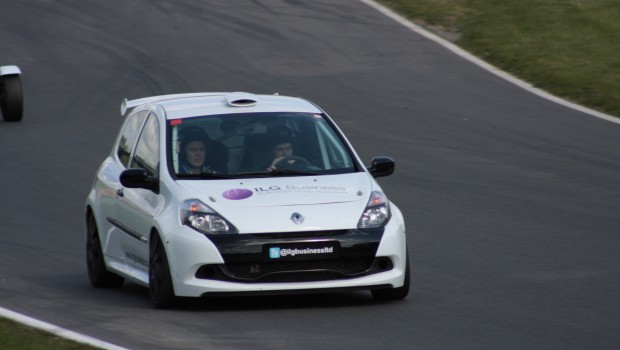 Saracens winger Chris Ashton, scrum-half Richard Wigglesworth and South African hooker Schalk Brits headed to the Kent track fresh from victory over closest rivals Northampton Saints on home turf at Allianz Park in Hendon on Sunday, a result which enabled ‘Sarries’ to open a 10 point lead at the top of the championship.

Also enjoying an entirely different type of track activity from his days competing in track and field, former Olympic and World Championship javelin thrower Steve Backley OBE took the opportunity to experience the thrills of a race-prepped Renault Clio Cup during the day organised by Richard Groves of ILG Business Ltd for some of his company’s leading Ambassadors.

As well as passenger laps in the latest racing Clio, the VIPs also had the opportunity to actually get behind the wheel in the previous generation Clio Cup car – an example which was raced in 2013 by Bushell and which is now owned by ILG Business for trackday use.

“It was a really great day, fantastic all the guys had the chance to get in the fourth generation car for some passenger laps as well as actually driving the third gen Clio”, reflected Bushell, “Everyone thoroughly enjoyed being taken out for a blitz in the new car, they were beaming from ear-to-ear and said it gave an incredible insight into what it takes to be a racing driver.”

Groves added: “We are going to do a number of these days, we bought Mike’s 2013 Clio Cup to do some track days and invited some of our company Ambassadors down to Brands. We provide Saracens telecoms through Active Digital and an Elite performance App for the first team through ILG Business. I would like to do some more track time and perhaps get my car out in the Michelin Clio Cup Race Series, that’s the aim.”

Unsurprisingly, the ultra-competitive sportsmen were all keen to be quickest on the day with the honour actually falling to Richard Wigglesworth. Chris Ashton and Schalk Brits were also fast, but the latter unfortunately ran wide when he was on course to snatch the best lap.

“I am definitely no expert at driving on track, I just got a little bit braver lap by lap”, said a very happy Wigglesworth, “I loved it, it was really, really good and brilliant having Mike alongside and just believing the Clio would stick when he said it would. I think I might have the bug now!”

Ashton said: “It was completely different to anything I have ever done before, I think I went off a bit too fast and scared Mike a bit! I do really like my cars and my usual drive is a BMW M6, so it’s a bit bigger and not as nimble as the Clio. I have done a few track days in Ferraris and that, but nothing like this. I really have got the bug – I’d love to have a go at racing a Clio.”

“I was just getting the hang of it before I got black flagged for coming off the track, we just went a little bit wide but I kept my foot in as I was trying to beat Richard [Wigglesworth]”, said Brits, “I think I would’ve done better if I had longer in the car, I absolutely loved it, I’m buzzing and really want to do some more.”