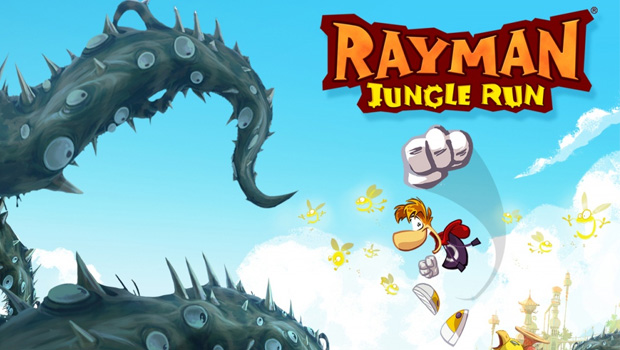 Ah the 90s, a time when all kinds of wonders came in to our lives, Pulp Fiction hit the big screens, Britney Spears became the new pop princess but of course who could forget one though from that time, “why on earth hasn’t this guy got any limbs!?”, you got it, our loveable friend Rayman!

After 17 years Rayman is still going strong, and with Ubisoft’s latest release Rayman is better than ever, with a twist! In Rayman Jungle Run, it seems Rayman hasn’t heard of the ability to stop, he’s all about the endless running, no more exploring the mysterious lands but instead running like a mad man through the treacherous jungle. Controls are nice and easy one this, in fact they couldn’t really get any easier, it’s simply matter of tapping the screen to get Rayman to jump. If you’re a die hard Rayman fan then this may seem like it’s not going to be a whole lot of fun as you can’t control Rayman as much as you used to once upon a time but fear not, as you go through the game there are plenty of cool features that get added such as a propeller on Rayman’s head to help him glide.

The graphics used in the game are very typical of the Rayman series however with the newer games, especially with this one, the artwork is much more improved with more lighting effects and vibrant colours. The game is very easy to play but at the same time can be real difficult to complete so there’s a nice balance in the gameplay. The pace of the game is quite fast but that is to be expected with an endless runner style game, the great thing here though is that there are plenty of levels to get through, each with a whole range of great looking scenes along with an array of obstacles to avoid.

Really, you can’t go wrong with Rayman and this game has really proven that despite having a completely different style of gameplay to the usual Rayman games, it’s still a huge success. Download it now!